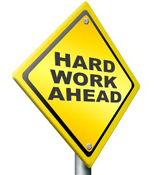 We’re living in strange days.  Evil is called good; and good is called evil. For many in the U.S. today, it would appear that work, hard work, is a dirty “four letter word.”  Our government seems to concur – by rewarding laziness and punishing success.  Many, faced with this frustration, are ready to give up.  But I want to propose that whatever the obstacles, hard work has benefits that should not be overlooked or avoided.  As they say in the Marines, “no one ever drowned in sweat.”  We need a revival in our work ethic.  For many, I’m preaching to the choir.  Good for you.  But sometimes even the hardest of workers get discouraged.  This little article is your dose of “just do it” for the day.  “Whatever you do, do it with all your heart (Colossians 3:23).”

What have you been avoiding…because it seems hard?  What new endeavor have you put off, because it just seems impossible?  I’ve got news for you.  It IS impossible – so long as you sit there and do nothing.   But hard work just might change all that.  In fact, it won’t happen any other way.  No one is going to carry you upwards toward success.  You need to climb.  As famed motivational speaker Zig Ziglar put it, “The elevator to success is not running; you must climb the stairs.”

To help motivate you toward hard work, allow me to share these 5 Benefits of Hard Work:

1. Hard Work Builds Character – We’re living in the midst of a character crisis.  If we can’t have something in 5 minutes we don’t want it.  And if getting it is hard, forget it!  But hard work builds character.  You learn discipline.  You learn to focus.  You learn to manage your time and your resources.  You learn to ignore the critics who are telling you it can’t be done.  Don’t be a quitter.  Quitting is easy.  Giving up is easy!  But EASY never builds character.  Strong character is built the same way strong muscles are build – Hard Work!  Success – you see – isn’t the greatest reward of hard work.  Character is more important than success.  And hard work builds character.  Former MLB player for the White Sox and Blue Jays, Samuel Ewing, put it this way:  “Hard work spotlights the character of people:  some turn up their sleeves, some turn up their noses, and some don’t turn up at all.”

3. Hard Work Draws Attention – Want to get noticed?  Work hard.  The diligent stand out.  We live in a culture that increasingly encourages and fosters minimal effort.  Want to turn some heads today?  Give 110% to whatever you are doing.  It doesn’t matter how many talents you have, or what you are called to do, do it with passion!  Give it your heart!  And soon the world will be watching.  “If a man is called a streetsweeper, he should sweep streets even as Michelangelo painted, or Beethoven composed music, or Shakespeare wrote poetry.  He should sweep streets so well that all the hosts of heaven and Earth will pause to say, Here lived a great streetsweeper who did his job well.”  ~Martin Luther King, Jr.

4. Hard Work Brings New Opportunities – That is, hard work opens doors.  The lazy complain about the lack of luck.  Thomas Jefferson said ““I’m a greater believer in luck, and I find the harder I work the more I have of it” Those who work hard find new opportunities always presenting themselves.  Hard work is like an opportunity magnet.  Sometimes these opportunities just seem to appear out of thin air, other times they come through new acquaintances, and often they are the result of greater insights and understanding that hard work produced.  Whatever the manner – hard work is usually the cause.  Edison’s famous words are relevant to this point: “Opportunity is missed by most people because it is dressed in overalls and looks like work.”

5. Hard Work Blesses Others – No lasting benefit to mankind is achieved without hard work.  The second greatest commandment is to love our neighbor as ourselves.  We typically work hard to please ourselves.  We should work harder to please others, bless others, and help others.  Work hard, and don’t worry about who gets the credit.  Work hard, and the world is blessed.  Such individuals are few and far between.  Hard workers are worth their weight in diamonds.  Horace Mann, the 19th century education reformer born here in my state of Massachusetts once said “Be ashamed to die until you have won some victory for humanity.”