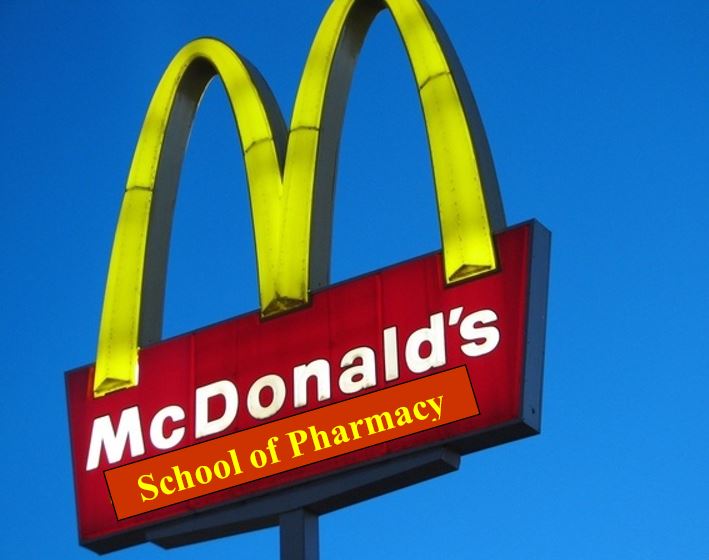 Nothing like starting the week with a little trip down Satire Street.  Thankfully all my friends in academia have a good sense of humor…

It hit the newsstands like a ton of iron tablets.  We knew the numbers were growing, but to see the data in cold print was shocking.  Business analysts writing for the Wall Street Journal now predict that before the end of the fiscal year pharmacy schools will outnumber McDonald’s locations in the U.S.

To quote from the article: “The McDonald’s business model has been suffering lately and growth has slowed as a result, in spite of their low-priced meals.  But for some reasons students are lining up in droves to purchase the $250,000 McNugget known as a pharmacy degree.”

Schools are defending their programs.   “Everyone deserves access to a great school of pharmacy,” said a professor of pharmacy practice from one of the newest local schools.  “If you need a pharmacist, then you need schools of pharmacy.  No reason we shouldn’t have a good pharmacy school in every city in the U.S.”

“We’re pumpin’ students out like cheeseburgers” boasted one Pharmacy School Dean who requested to remain anonymous.  “We’re gonna show the world that McDonald’s isn’t the only organization with 1 billion served.  We’ll put up golden arches over every school of pharmacy if we have to.  And given the price of a PharmD, we can actually make them out of real gold!”

But the surplus is causing concerns in the job market.

Pharmacy schools are now recommending students pursue longer training and more residencies to help differentiate them from their peers.  We talked to one student about this.  “I’m currently on my PGY18.  Hard to believe I graduated 18 years ago.  But due to the job market saturation I just keep adding years of residencies to help make me a better candidate.  Still, I keep getting overlooked because several competing candidates are up to PGY22 now.  I just keep saying that next year I’ll be done.”

Recruiters are having trouble placing candidates.  “There are just too many pharmacists to choose from,” said one recruiter.  “For every job opening there is a pile of applications taller than a super-sized soda.”  We found one staffing agency that is determined to place candidates by developing a deep discount approach.  “We’re putting ‘em on the dollar list.  They have to agree to work for $1/hour for at least 6 months…but after that they have a chance of getting a job at the regular price.  Some pharmacists have paired up and are offering themselves as ‘2 for a dollar’ for a limited time.”

We asked another Dean from a school of pharmacy if there is any end in sight.  “Not a chance,” she said.  “Walmart still employs more people than pharmacy schools.  That’s our next target.  We won’t be satisfied until our schools are the #1 employer in the world.  We are committed to excellence in the abundance of pharmacists we churn out.”

The AACP is having a tough time keeping up with the accreditation process for all the new schools of pharmacy.  We talked to the Executive Vice President of the Association and she told us “the schools are multiplying like rabbits.  Every morning I wake up to a new pile of applications to open a school.  We basically just have to rubber stamp their request.  No time to really research if the school is actually doing what they are supposed to be doing.  It’s kind of like working in retail pharmacy again.”

But employers are luvin’ it.  One chain-pharmacy HR employee said “We have our choice of pharmacists now.  It’s like walking into the bread aisle at your grocery store.  We used to have to accept just any competent graduate with 8 years of education, a license and a diploma.  Now we can really target our choice based on our business needs.  We check height, weight, and do a full medical examination.  We only have to hire those that seem the healthiest.  And we make sure the females agree to not have babies during the busy months.  It’s like a dream come true!”

Rumor has it that when pharmacy schools do exceed the number of McDonald’s locations that they plan to actually change the degree title.  “The PharmD will be gone.  Everyone will graduate with a McD.”  This couldn’t be actually confirmed but one reporter did overhear a professor in the dispensing lab insist that a student end the counseling session by asking “do you want fries with that?”