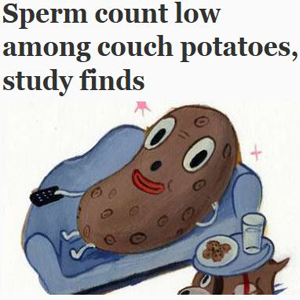 I‘m grateful for the media.  When the FDA fails to approve any new drugs for a few days, and writers like me start wondering what to write about next, there is always some study which the popular press gets hold of and runs away with.

This type of headline started popping up everywhere today.  The “Health” sections of major newspapers and their corresponding websites all wanted to convey the important news that male couch potatoes may be damaging their sperm counts.  Gasp!    As one site reports: there is “a strong correlation between a lack of exercise and excess television watching and lower sperm counts.”

But there are 2 problems with the direction most articles on this study took:

All the researchers have done at this point was to show a CORRELATION between men who watch more TV and lower sperm count as compared to those who workout more.  That’s it.

Correlation, unfortunately, doesn’t tell us a whole lot.  Now, if they took the “couch potato” group and subjected them to 8 weeks of intense exercise and THEN checked their sperm counts that might given us some more information.  Maybe they could have taken the obsessively exercising group and strapped them to a boob tube for 8 weeks as well, then checked their sperm count.  That might have told us something.  But a simple correlation doesn’t really tell us diddly.  In fact, the simple correlation could be interpreted in so many ways, I personally thing MANY more creative angles could have been taken.

If I were a journalist, I might have chosen to write my article with any of the following titles instead:

“HIGH sperm count, NOT willpower, the reason why men exercise” or even

“EXPOSED:  Gym owners appear to discriminate based up sperm count.”

Seriously.  Any of these could be valid angles in which we might happily run with the data provided.  The suggestion that the TV watcing and couch sitting actually CAUSED the low sperm count is gratuitous.  The study didn’t prove that.  The science didn’t suggest that.  But the media is happy to take the angle of their choice.  And so we have it.

So.  Get off the couch.  Get into the gym.  Get that sperm count back up.  And maybe you’ll have less time to read some of the nonsense we find online.