Religion, the Tiger, and The Life of Pi 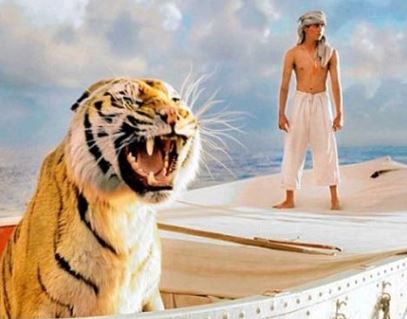 I‘m not a big movie-going fanatic.  Personally, I prefer to read a book.  It’s not that I don’t like the movies, but at this stage in life we just don’t have that much flexible time.  When I do see a movie, it will typically be something we can go to as a family or watch at home together.  With 4 kids, the “movie night” at home tends to be the most affordable option.  Last night we watched The Life of Pi, a movie based upon the book written by Canadian author Yann Martel and first published in 2001.

Warning – if you don’t want me to spoil anything for you – stop reading now.  But this post isn’t a general review of the book or movie.  It is more about the symbolism and message.  Or at least a small sliver of it.  If you haven’t read the book or seen the movie, some of what I’m saying may not make sense.

The Life of Pi is a fun book; a page-turning story about a boy who survives 200+ days aboard a small lifeboat with a bengal tiger (named Richard Parker).  But what’s it really about?

The book is essentially, in my opinion, about the existence of God and the truth/value of religion.

The “God” image in the story is the tiger.

We see this in many ways:

It is understanding this imagery that makes sense of the “2 stories” of survival that we are told.  The stories are about managing through life “with God” (i.e. the tiger) or “without God” (i.e. the “people” version of the story).  Pi repeatedly throughout the story talked about how Richard Parker helped him survive all the trials of the sea.  Though obviously threatening, he also kep Pi sharp and alert.  It is a picture of man’s dependence upon God to deal with and manage the trials of life.  It is not, however, presented in a disparaging or unfavorable light.  Quite to the contrary, when compared to the “alternative” version, this was readily acknowledged by the writer as “the better story.”  In the “people” version of the story, Pi is the tiger, Pi is god, and thus man is god attempting to make it through on his own.  The “writer” had to choose which one to go with.  He chose the tiger.  He chose God.  He was promised a story that would make him believe in God, and it did.

As someone who has spent the better part of the past 25 years studying Christianity, the Bible, theology and apologetics, I appreciate Yann Martel’s unique approach.  I know nothing about his personal beliefs about religion.  I’m glad I read the book and saw the movie.  In fact, I would feel very comfortable using some of the images he presents to illustrate a variety of key Biblical doctrines.

These are my own adaptations, and almost certainly not a part of Yann’s idea:

The sunken ship:  The Bible describes man’s condition as fallen, sunken and hopeless.  We have all “fallen short of the glory of God.”

The mysterious island that kills at night:  Man’s nature is mysterious.  Outwardly it often looks lovely.  Inwardly, however, it is dead spiritually.  “The heart is desperately wicked above all things, who can know it?” and “Man looks on the outside, but God looks at the heart.”

The doubting inspectors:  They didn’t like the tiger story.  They couldn’t bring that story back.  Faith often faces doubts.  Doubts from the outside, and doubts from the inside.  But these doubts do not destroy faith.  They often press us to study harder, think more deeply, pray more fervently.  “Lord I believe, help my unbelief.”

I can’t help comparing in my mind Yann’s story with that of C.S. Lewis in The Lion, The Witch and the Wardrobe.  Of course, in Lewis’ story the “God” imagery takes the form of the Lion.  And the Lion does more than provide hope, strength and courage.  He gives His life.  In Lewis’ classic the Lion is a picture of Christ dying for sinners.  Yann’s tiger never quite goes that far.  But of course, his purpose is not the same as Lewis, and he is telling a different story.

This was a great book.  I highly recommend it.  It was a good movie too.  And I enjoyed thinking and talking it through with my family and with readers like you.

Tags: Meaning of the Life of Pi, Movies

» Faith & Life » Religion, the Tiger, and The Life... Previous post:
Is Zithromax Safe Anymore? I think so… Next Post:
RxWiki: Medication Information FOR Patients FROM Pharmacists