Things have been a little quiet here at The Honest Apothecary the past couple weeks.  There are several reasons for this.  Some of these reasons I will be sharing in forthcoming blog posts, so stay tuned.  But one of the reasons I will share right now.

On Wednesday October 30, 2013 I had the privilege of delivering a speech on the subject of Professionalism and Pharmacy to the University of Connecticut (my alma mater!) School of Pharmacy class of 2017.  In attendance were 100 students, their families, the dean and representatives from the faculty.  It was an honor to address them on a subject I personally feel strongly about, and the speech was well received.  I was asked “will you post it?”  So…I guess I will.

Just be aware that, as with any speech, it is directed specifically to the audience and (in some cases) the faculty sitting there.  I  have not made any efforts to remove those personal references.

First I want to extend my sincere thanks to Dr. Hubbard for extending this very kind invitation to come here today and address you on the topic of professionalism in pharmacy.  It is an honor to speak to you.  I think, next to speaking with patients, talking with pharmacy students is probably my next favorite professional activity.  Maybe that is because, although I can sympathize with my patients, I can empathize with students.  I’ve been there.  Pharmacokinetics – been there, done that.  You do survive. 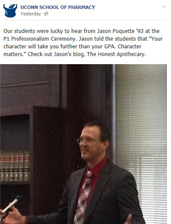 Coming here to the UConn campus to speak to you today is particularly meaningful to me, since it was exactly 20 years ago this year that I graduated and began my career as a pharmacist.  That means if I were a drug, I would be a generic by now.  It is really hard to believe it has been 20 years since I was sitting in Dr. Bogner’s classroom.  And it’s not fair either.  Somehow I managed to get 20 years older and she doesn’t seem any older than the day I left (will that get me a few of those points back on that test?)

But yes, it’s been 20 years.  That means that when I graduated pharmacy school…wait for it…there was no such thing as Google, no one owned a DVD, and Ace inhibitors were the cutting edge of anti-hypertensive therapy.

As for my career, I have spent 13 of the past 20 years working as a manager of busy retail pharmacies.  During that time I also served for a while as an adjunct faculty member of some other school of pharmacy near my home in Massachusetts.  I also have worked for 7 years for a great company called Decision Resources providing data and analysis related to prescription formulary information for clients.  And just recently I have accepted a new position with AmerisourceBergen to be the manager of a new outpatient pharmacy in Saint Vincent’s Hospital in Worcester.  I have also had the privilege of running a blog entitled The Honest Apothecary where I write about pharmacy related topics, mostly related to pharmacy careers and pharmacy businesses.

The story is told of the famous boxer Muhammad Ali.  Apparently he was flying in an airplane when the pilot came over the intercom and said they were about to experience a significant amount of turbulence and everyone should put on their seatbelts.  The stewardess went up and down the aisles checking on everyone, but when she came to Ali, he didn’t have his seatbelt on.  The stewardess said to him “Mr. Ali, you have to put your seatbelt on.”  He looked back at the stewardess and said with typical bravado “Superman don’t need no seatbelt.”  The stewardess didn’t miss a beat.  She looked back at him and said without hesitation “Superman don’t need no airplane.”

The stewardess was right.  Superman doesn’t need an airplane.  But you and I can’t fly without one.  And in the same manner, if you really want your career to fly, you are going to need something to carry you.  And I would suggest to you that the airplane of your career success is professionalism.  The thing that will make the biggest difference in how far you go in your career (aside from attending UConn of course) is your personal commitment to professionalism as a pharmacist.  And I’m not just saying that because I’ve been asked to speak on this topic.  After 20 years of observation I can say that the one distinguishing trait of those who seem to have the most satisfying and successful careers, is professionalism.

But what is professionalism?  I can’t possibly exhaust that theme in few minutes.  But if you will bear with my airplane illustration just a bit longer, I would say that professionalism, like a plane, includes at least 3 indispensable elements:

Hold yourself to a high standard of ethics.  It is simply impossible to exaggerate the importance of your character.  Right now maybe you are thinking “yeah, but right now all I can think about is passing that next exam!”  I understand that.  And don’t get me wrong – grades matter.  But listen – mark my words – your character will take you further than your GPA.

The engine of professionalism is the high standard of ethics that you hold yourself to.  Pharmacist David Tipton in his book entitled “Professionalism, work, and clinical responsibility in pharmacy” says that the behaviors related to professionalism include “punctuality, appearance, courtesy, concern for others, grace under pressure, honesty, discretion, judgment and commitment to excel.”  Do you hear what he’s saying?  Ethics matter.

Maybe you have heard the story of the two notorious brothers in the south.  They were scoundrels.  When they weren’t fighting or drinking they were usually spending the night in the county jail.  Well, one day, all of a sudden, one of the brothers died.  So the surviving brother went to the local preacher who would be conducting the funeral and said to him “listen, I know we haven’t exactly been angels in this town.  But I have this $10,000 you see.  And if you could find it in your heart to just say…just say at the funeral…that my brother was a SAINT, I will gladly donate this $10K dollars to your church.  Well, the day of the funeral came.  And the preacher stood up before the town folks and said “Lying here before us in this coffin is probably the lowliest, most corrupt, crooked, shady, base, foul and debauched specimen of humanity that has ever walked the face of the earth.  BUT…compared to his BROTHER…he’s a saint.”

You can’t buy character.  And professionalism will demand a commitment to the highest standard of ethics and integrity.

Commit yourself to the highest standards of excellence in all that you do.

Vince Lombardi, the late and great football player and former head coach of my father’s favorite football team, the Green Bay Packers, once said “the quality of a person’s life is in direct proportion to their commitment to excellence, regardless of their chosen field of endeavor.”  I think he’s right.

Excellence is made up of many parts.  It’s like a really complex glass of wine, or a really great work of art.  Every time you look at it, you see something new.  But if we distill excellence down there are several key ingredients.  I would refer to them as Inquiry, Industry and Imagination.

A.        Inquiry:  that is, keep learning.  Now, right now that might seem like all you are doing.  But the day will come, sooner than you think, when the structure of the university will no longer be around you – and learning will be up to you.  And when that day comes, keep learning.  As someone put it well “Live as if you were to die tomorrow.  Learn as if you were to live forever.”

B.        Industry:  that is, work hard.  I’m sure you’ve heard the quip “No one ever died from hard work.  But why risk it.”  But there can be no excellence without hard work.  Thomas Jefferson said “I’m a great believer in luck, and I find the harder I work, the more I have of it.”  There’s a great quote by Julius Irving, affectionately known as Dr. J to those of us who grew up watching him play basketball. He said “Being a professional is doing the things you love to do, on the days you don’t feel like doing them.”  And my all-time favorite quote on industry is from the Old Testament book of Ecclesiastes “Whatever your hand finds to do, do it with all your might.”

C.        Imagination.  And the final ingredient in excellence, in my opinion, is imagination.  Professionalism means, to some extent, always thinking outside the box.  The goal of education isn’t to create cookie-cutter pharmacists.  The goal of your education is to provide you with the resources to accurately think for yourself, create new opportunities for service and care.

I could easily get carried away talking about pharmacist friends of mine who have used their imagination to introduce great new ideas.  My friend Dr. Ogbru in New Jersey saw the need for a platform in which pharmacists could connect online and share meaningful, well-written content.  So he started RxEconsult.  My friend Dr. Steve Leuck in California saw a need to bring audio prescription counseling in a digital format to patients, so he started AudibleRx.  Another friend, pharmacist Randee Bowder in Oregon opened her own MTM consulting practice.  I could go on.

III.       Finally, the Fuel of Professionalism: Care and Concern for your Patients.

I’m sure you have heard it said “No one cares how much you know, until they know how much you care.”  The truthfulness of that quote came home, literally, around 2AM one morning about 10 years ago.  There we were, fast asleep, when we hear this knock on our door.  There, standing on our doorstep, was a young couple holding a crying baby in their arms.  Now, we knew them.  We were serving as foster parents for newborn children awaiting adoption, and this couple had just adopted this baby we had cared for.  To make a long story short, I went down and opened the pharmacy; got some Mylicon drops for the baby, and before long they were on their way home.  The point is this:  they came because we cared.  Professionalism, true professionalism, is fueled by a care and concern for those you serve.

Yesterday I had the privilege of speaking to a vast crowd of about 10 seniors and shut-ins in Methuen, MA about managing their medications.  One of the nurses told me how nice it was to have someone actually come out and talk to them and answer their questions.  “They don’t get many visitors” she said.

There are all sorts of ways that your care and concern for patients can come out.  But the point is this:  true professionalism as a pharmacist means showing that you really care.   The word “Apothecary” comes from the Latin “apotheca” which literally means “a storehouse.”  Well, your pharmacy education will provide you with a storehouse of information, and it will be your professional responsibility to share that information with others.  The fuel of professionalism is your care and concern for your patients.

As Jacob Marley said to Scrooge in that Dickens Classic ‘A Christmas Carol’ “I wear the chain I forged in life.”  It isn’t too far of a stretch to say that you will wear, for a long time, the chain you forge in school.

B.        Be careful how you present yourself online.  What happens online stays online…forever.