An Interview with Harold Cohen – Editor-in-Chief of U.S. Pharmacist 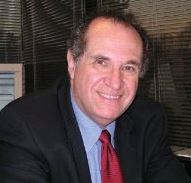 There are certain fears, pains and frustrations known only to writers.  Sometimes readers simply cannot hear the silent echoes of torture screaming behind a well constructed sentence.  A writer’s office often contains trash cans filled to the brim with the crumbled cadavers of paragraphs who perished.  Respected author Neil Gaiman put it well “Being a writer is a very peculiar sort of a job: it’s always you versus a blank sheet of paper (or a blank screen) and quite often the blank piece of paper wins.”

Therefore when I have a chance to speak to a pharmacist who has made writing and publishing his career, I know I’m in for a special treat.  Harold Cohen is a pharmacist writer, publisher and Editor-in-Chief of U.S. pharmacist magazine.  He has a long career in publishing, and has a valuable perspective on the profession of pharmacy.  I have often enjoyed reading his editorials, and have been personally blessed with the fruit of his labors in reading the well-written and relevant articles in U.S. Pharmacist every month.  It was an honor to speak to him, and I’m grateful to share our conversation with my readers here at The Honest Apothecary.

1)      Mr. Cohen, would you be willing to share a little about your career as a pharmacist, prior to entering the publishing side of our profession?

I guess you can say that my pharmacy career started in high school.  I attended Fort Lee High School, in Fort Lee, N.J.  For those who know something about the area, Fort Lee is home to the George Washington Bridge linking New Jersey to New York.  The high school is just blocks away from “the Bridge” as we liked to call it.  During my early years in high school I work as a clerk and delivery person at a local independent pharmacy. I was fascinated with how the pharmacist would prepare prescriptions and how he interacted with his customers/patients.  I would go out on deliveries daily and also interact with the same customers, who from time to time asked questions about their prescriptions being delivered.  I felt like this was the path I wanted to take;  although, unbeknownst to me at the time it wouldn’t be for another several years.

I graduated high school in 1963 and most pharmacy schools offered a 5-year program, 1 year of undergraduate work and 4 years of pharmacy school (and one-year of “internship” after that before I would be able to take my test for licensure as a pharmacist.)  In most pharmacy schools students graduated with a Bachelor of Science degree only. I decided on Rutgers University, which was a state school in N.J. for my undergraduate work.  I had to declare a major and minor at that time and I chose Sociology and Psychology.  My thinking was that both offered the necessary courses to go to a medical, mental, or pharmacy school in the future.  I enjoyed undergraduate school and actually attended for a total of three years before deciding to switch to a “professional” school.  I ruled out medical school because it would take too long and was very costly. I did take my dental boards for acceptance into dental school, but my manual dexterity was abysmal, so thinking about my days as a delivery person in high school I settled on an education in pharmacy. Rutgers had a pharmacy school, but I was informed it would take me another three years to complete my studies.  I decided to go for it. I graduated Rutgers College of Pharmacy in 1969 after a total of 6 years of schooling and interned in a independent pharmacy for the required year before taking the test for licensure, which happened the following year. After becoming licensed in 1970 I tried many professional pathways offered to me: independent pharmacy, chain pharmacy, health system pharmacy (back then it was called “hospital pharmacy”), and industry.  I liked the interaction with patients and chose independent pharmacy.  I eventually purchased two independent pharmacies and for the next 12 or so years I worked in two retail settings in New Jersey.  I became discouraged with retail pharmacy about the time third-party insurance came on the scene. I saw the handwriting on the wall for pharmacy’s future and didn’t like what I saw.

My biggest fear was that the emphasis would be on volume and not quality.  It would take time away from my interaction with patients and decided to leave retail pharmacy behind. I sold both stores and decided to fulfill a passion I’ve had for writing and looked for a job in publishing. While the salary was considerably lower than working and owning two retail pharmacies, I needed to following my instincts.  It was the best decision I ever made.  I should add that aside from my job as a delivery person at the local pharmacy, I spent two summers in high school working at Palisades Amusement Park, one of the more famous amusement parks during that time period. I was offered a job as Assistant Public Relations Director where I sharpened my writing skills. You can say that I actually parlayed those skills into a job some 15 years later when I applied for a job at Drug Store News as its assistant pharmacy editor.  After taking a writing test, I was offered the position. Despite the nearly three-hour round trip commute to New York City daily and the low salary, I loved being in publishing and following my dream…and I never looked back.

2)      You have, for some years now, been primarily involved in dispensing information.  This is such an important part of our profession, helping us keep in touch with a much wider group than we otherwise could.  How did you first become interested in serving our profession through editing, writing and publishing?

Most of this is mentioned in Q1.  In my current position as Publisher & Editor-in-Chief of U.S. Pharmacist I am ultimately responsible for choosing the articles we present to pharmacists.  As a pharmacist I am in an ideal position to choose topics I believe will help pharmacists in their day-to-day professional responsibilities, regardless of their practice setting. All of the clinical review articles presented in U.S. Pharmacist are peer-reviewed which assures pharmacists the content is unbiased. The breadth of the content available allows pharmacists to pick and choose those topics of most importance to them.  Included in each monthly issue is a quality peer-reviewed CE lesson that is accredited by the ACPE.

3)      You have a unique and broad perspective on our profession through your connection with Pharmacy Times, Drug Topics and now U.S. Pharmacist.  Could you comment briefly on how you have seen the profession change in your lifetime?

I’m pleased to report the profession has changed in many positive ways since I graduated from pharmacy school in 1969.  The biggest change is the mandatory PharmD degree. While there was much debate whether this degree was really necessary for pharmacists entering retail, I was a big advocate for it.  As a result of this degree, students are more clinical in their thinking which prepares them well for the profession of pharmacy today, regardless of the practice setting.

With more sophisticated drugs being approved, understanding their mechanisms of action and other pertinent information regarding their use are essential to be communicated to patients.  While all the pharmacy magazines cover this in one fashion or another, only U.S. Pharmacist offers peer-reviewed in-depth clinical content to aid pharmacists in their quest for the clinical information needed to perform their professional consultative responsibilities.

Another big change in the profession on the retail side is that the vast majority of prescriptions being dispensed today are poorly reimbursed by third-party payers, which increases to the financial instability of retail pharmacies.

On a more positive note, there is a trend emerging that will allow pharmacists to get out from behind the prescription counter to practice consultative medication therapy management with their patients.

4)      If you could say something to the pharmacists of this generation, what would it be? 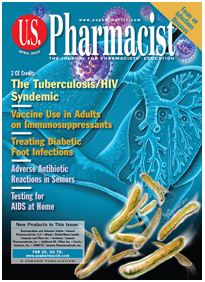 I would say you’ve spent six plus years on your education, do not make it go to waste.  It is important that retail pharmacists in particular emphasize to their employers the need to use their education in face-to-face consultations with the patients. Allow pharmacy technicians to “fill” prescriptions, but when they get dispensed, pharmacists should come from behind the counter and discuss them with the patient. The profession of pharmacy is changing and you should be part of that change.

5)      Have there been any particular highlights to your career in publishing?  What have you enjoyed the most?

I enjoy most all aspects of publishing a magazine directed to pharmacists.  I feel I am offering pharmacists the information they need to be successful in their practice. I particularly enjoy the honor and privilege of voicing my personal opinions through my weekly op-ed column titled “Straight Talk.”  While some may not always agree with what I have to say, the purpose in writing the column is to open a discourse with pharmacists on a variety of subjects of importance to them.  Discussion, both positive and negative, is healthy and while there may be no immediate resolution to a particular issue, I believe making it public allows pharmacists to make their own decisions.

6)      Would you like to tell my readers anything about how U.S. Pharmacist is seeking to serve the profession as an indispensable resource for pharmacy professionals?

I think I’ve pretty much covered this, but our goal at U.S. Pharmacist is to provide pharmacists with the necessary information they need to perform better in performing their  professional day-to-day responsibilities. With its peer-reviewed content, I feel U.S. Pharmacist is better preparing pharmacists for the future of the profession which I believe will involve more direct involvement with patients’ well being and a greater emphasis on consultation in collaboration with the physician community.

I want to thank Harold Cohen again for granting me this informative interview.  I appreciate what writers and journalists have done to help myself and others think through relevant issues related to our profession.  Ernest Hemmingway quipped “there is nothing to writing.  You just sit down at your typewriter and bleed.”  Don’t I know it.  And I’m thankful for the blood-donations of the many pharmacy-authors out there who have given so much to crafting well-written and educational material for both patients and professionals alike.