Do Nothing – Get Nothing: #LifeTips 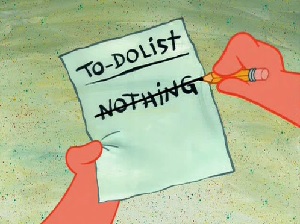 I work for a hospital that is having a mid-year health plan enrollment that requires everyone to select from a new list of plan choices.  Nothing unusual about that.  But among the posters that they have hung to try and motivate employees to be sure to enroll on time is a big one that reads “Do Nothing – Get Nothing.”  In other words, if you ignore the constant pleas from the HR department to take the time to go online and select your plan…you will have no insurance shortly.  You have to make your choice.  You have to go online and do this.  If you don’t – you lose.  You get nothing.

“Do Nothing – Get Nothing” is catchy.  And it struck me as relevant to far more areas of life than a simple insurance enrollment slogan to rally employees to take action.  There’s actually a lot of wisdom in those 4 words.  It explains a lot of the frustration that many folks I meet have in life.  It explains why so many people often feel stuck in a rut spiritually, financially, emotionally, in relationships, friendships and in their careers.  Do nothing – get nothing.

We’re all good at making excuses for why things are not the way we would like them.  It’s easy to see ourselves as victims of circumstances beyond our control.  It’s a much harder pill to swallow to admit that much (if not all) of our present circumstances is a result of our own responses to situations, our own decisions that we have made, our own unwillingness to take the necessary steps to fix things.

Do nothing – Get nothing.

The obvious antidote to this victim mentality that pervades our society and (if we’re honest) our own lives is to be pro-active.  Do something about it.  Sitting back and waiting for your luck to change (I don’t believe in luck anyway) is a waste of time.  Rather than moaning, complaining, whining about our situation to individuals who probably can’t do anything about it anyway – why not take some positive steps to change?  Do something – and watch what happens.

Here’s a true story.  Just over a year ago I was talking to a friend who was stressed out, over worked and miserable.  He felt trapped.  He wasn’t enjoying his life or family.  I said to him “John – if something is going to change, then something HAS to change.”  That was it.  Nothing terribly profound.  But several weeks later I ran into John again.  He was smiling.  He told me that what I had said made a huge impact on him.  He finally realized that his life was never going to change on its own unless HE MADE A CHANGE.  He did.  He quit one of his jobs and got his priorities back in line and he felt like the weight of the world had been taken off his shoulders.

He did something.  And good things happened.  But if he had decided just to keep plugging along, then “Do Nothing – Get Nothing” would still be ruling his life and he would likely be more miserable than ever.

John wasn’t lazy.  Far from it.  I suspect you aren’t either.  But there is a sort of “mental laziness” that avoids making the changes that will improve our lives because for some insane reason we would just rather be busy than happy.  It makes no sense.  And I speak as someone who is often as guilty as the next guy.

There is actually a Proverb about all of this.  In Proverbs 22:13 we read “The lazy man says, ‘there is a lion outside!  I shall be slain in the street!'”  In other words, this person invents an excuse to do nothing.  There is no lion in the street.  But because he doesn’t want to do something, he makes believe there is a danger that doesn’t really exist.  He does nothing.  He gets nothing too

Tony Robbins put it this way “Success comes from taking the initiative and following up…persisting.”

Do Nothing – Get Nothing.  It’s more than a slogan.  It’s a truth about life.  I’m not suggesting the moment you stop making excuses and begin being pro-active about your life that things will suddenly get better.  Life might get harder for a while.  But if you want things to change – you have to start changing.  Make new habits.  Start new projects.  Take some steps toward that goal.

Tags: Being Proactive, How to change, Motivation

» Motivation, Leadership & Success, Pharmacy Careers » Do Nothing – Get Nothing: ... Previous post:
Pharmacist Factory – A Guest Post by Joey Mattingly, PharmD, MBA Next Post:
Studying for the BCPS Exam – An Interview with The Blonde Pharmacist!