Are You Wearing the Wrong Size….JOB? 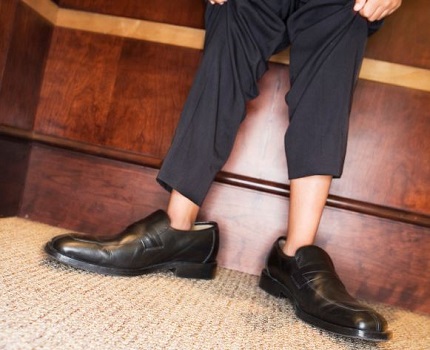 Have you ever tried walking around in a pair of shoes that don’t fit right?  Ouch.

Some pharmacists I have met appear to be doing  that with their careers.  They’re in the wrong size job.

Allow me to explain.

Job dissatisfaction may arise from many sources.  For example, you have a lousy boss (been there, done that).  Numerous studies have shown that more often than not, employees quit due to a bad boss than they quit due to a bad job.  But job dissatisfaction can arise from other sources too.  For example,  a terrible commute can make an otherwise  great job into a living nightmare.  I live about an hour from Boston.  I’m not sure you could pay me enough to work a 9am-5pm shift that required leaving the house at 6am getting home at 8pm due to fighting the Boston traffic.  No thanks.

Sometimes job dissatisfaction arises from too much pressure and stress – an all too common phenomenon in the pharmacy world.

But sometimes, and I think increasingly so in the field of pharmacy, job dissatisfaction arises because the pharmacist is simply in a job not suited to their goals, strengths and personality.  They are wearing, so to speak, the “wrong size job.”

The last 10 years have seen an  explosion in the variety of pharmacy career paths.  This has been due in part to the increasingly complex needs of healthcare institutions to provide clinical, technical and consulting services by experienced pharmacists.   There are more “types” of pharmacists working today than ever before (infusion, oncology, directors, floaters, formulary, informatics…the list goes on and on).

I  talk to pharmacists  all the  time who are unhappy with their present job.  They feel “stuck” and frankly frustrated  with  their situation.  Many believe that the blame is entirely on the circumstances of their present job.  Others blame themselves.  But the fact is that they may simply be in the wrong type of pharmacy job altogether.

How do you know?

The answer, I believe, is discovered both SUBJECTIVELY and OBJECTIVELY.  You start by asking yourself some questions.

1)  Do you feel out of place at work?  You know about  the proverbial “fish out of water.”  Is that you at work?  When you look around at your peers doing the same job, do they all appear to be equally uncomfortable in their position?  Now, if it is a brand new job to you, that may be normal.  But after enough time has passed so that you know the basics  of your job and you know “how” to do it…do you still feel like a square peg trying to fit into a round hole?

I’ve  lived in retail management most of my career.  I have observed, painfully, pharmacists who simply don’t belong in this field trying to make it work.  Everything they do appears unnatural and, as a result, very frustrating to them (and frankly to others around them).

2)  Do you enjoy talking, reading, sharing or laughing about your job and the things related to your job?  If none of those things describe you…EVER…you may be in the “wrong size job.”  Last night I went out to eat with a couple pharmacy friends (a pharmacist and a tech).  We laughed.  We complained.  We talked about hockey and calamari and politics.  But we also have fun talking about pharmacy-stuff.  We’ve all been in similar (roughly) outpatient settings for many years.  It is where we belong.  And we can easily and comfortably talk about it (or complain about it).  Can you?  If not…maybe you are in the wrong size job.

1)  Do you generally get bad reviews or criticism from above?  Are you a sort of “thorn in the flesh” for your boss and the company?  Bad reviews might be  just due to a bad boss or bad system.  But if OTHERS are not getting bad reviews…and you are…it might be that you are in the wrong type of pharmacy job.  Listen, consistently bad reviews is not necessarily your fault.  You might be trying to do a job you weren’t suited for.

I love my Craftsman wrench.  It is a great tool.  But it would get VERY bad reviews if I tried to use it as a hammer.  That is not what it was made for.  I think you get the point.

2)  Are you doing it just for the money?  Pharmacists make a decent salary.  Consequently it is not unlikely that you end up in a job you hate but you stay there because the pay is good.  The money might be a good reason to not quit.  But the money certainly isn’t a good enough reason to stop looking!  You might have to muscle through doing a job that doesn’t “fit” you for a while until something better is found.  But by all means don’t settle!

I’m not suggesting these  few questions are the litmus-test for wearing the wrong size job.  They are, however, a reasonable starting point as you think through your pharmacy career.

So, what should you do if you discover you are in the WRONG SIZE JOB as a pharmacist?  That is actually the subject for another blog post (maybe my next one!).  But for now I suggest you start to do some research and some networking.  Don’t quit your job.  Simply start to open your mind to the possibility of change.  If you think that change is impossible…then for you it probably is.  But for everyone else, it IS possible to find the job you are best suited for. I found mine.  I would love to help you find yours.

Fill in the form below and I’ll get you some help ASAP!

» Pharmacy Careers » Are You Wearing the Wrong Size….JOB? Previous post:
A FREE Guide to Hiring Pharmacists Next Post:
Mergers, Buyouts & Your Pharmacist Resume