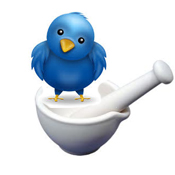 It was a nice little article.  And I whole-heartedly recommend following the folks she recommends.  Sadly, there were only 2 “people” Tweeters (the other 7 were agencies/organizations) that the article recommended…and they both (believe it or not) happen to write for Drug Topics.  What a coincidence.  LOL.  As I said, the whole list is great, and worth following.  And I am a personal fan of twitter users & bloggers Jim Plagakis (whom I have interacted with via email) and David Stanley (aka Drug Monkey) whom she mentions.

I was glad to see her mention @PharmacyPodcast.  Todd Eury and the folks over at the Pharmacy Podcast put on a great weekly broadcast on pharmacy related issues, particularly focused on matters related to community pharmacy practice.  You should  follow him on Twitter (also at @ToddEury) but also check out the Podcast site as well.

But then I thought…9 twitter accounts?  Hmmm.  I can BEAT that.  What follows are 10 Pharma Folks to Phollow on Twitter.  Disclaimer:  I could have probably listed about 8,000 accounts.  There are LOTS of fun folks on twitter I follow and interact with who tweet about topics MUCH more diverse (and interesting?) than the pharma stuff I tend to focus on.  Thank you all!  BUT…since the focus is pharma…I picked a few accounts that are frequent tweeters on pharmacy factoids and health-related topics.  If YOUR account was overlooked, I apologize in advance, and will be sure to let my editorial staff have it in the morning.

@FDALawyers:  Darshan Kulkarni is a pharmacist, and a lawyer and – according to his own words – “surprisingly not too boring.”  He tweets about the FDA, pharmacy law, health care and other interesting things.  In his spare time he also BLOGS.

@DrWalker_rph:  I’ve known and interacted with Dave for a while now.  If you move around in the Pharma circles online…you have probably bumped into him.  He’s kind of ubiquitous.  With a special passion for electronic health records and patient compliance…you really need to follow him for some great tweets and interaction.

@DrOgbru:  Dr. Omudhome Ogbru (Ome for short) is a pharmacist, entrepreneur, and the CEO of RxEconsult.  I interviewed him a week or so ago.  His twitter account will be loaded with links to great articles on all sorts of health care and medical professional topics.

@PharmacistScott:  Scott Gavura is a pharmacist and an active tweeter, as well as the founder and editor of the blog: Science Based Pharmacy. His focus is especially on pseudo-science and misinformation that often pervades the media and our culture.

@Shawn_G_Watson:  Shawn is a pharma executive with URL and actively tweets about pharma issues with a great mix of leadership-related quotes.

@Voltaire1999:  Dr. Bovee is a fiercely conservative and funny pharmacist tweeter from Florida, author of “A Prescription for Retail Pharmacy” and host of the popular Retail Pharmacy Podcast.

@pharmaphorum:  Paul Tunnah is a keen observer of what is going on in pharma, and is also the founder and CEO of the Pharmaphorum website.